Handling Gorilla3D is quite the same as using Firemonkey 3D. The main difference is the usage of TGorillaViewport as the main component for display. You can no longer use a TViewport3D or TForm3D as basis for showing 3D content.

The reason for that is, that Gorilla3D extends functionality a lot and needs special treatment, which the default viewport do not provide (f.e. Render-Passes, Lighting-Information, Shadow-Computation, …).

But, let's start and have quick look at the basic features of Gorilla3D and how they are going to be used.

Building an app with Gorilla3D and Delphi 10.3 Rio for Android

Since OpenGLES v3.0+ support was added to the framework, the NDK settings need to be changed. Because OpenGLES v3 was first delivered with Android 4.3 (API level 18), we need to change the minimum api version in our delphi setting. 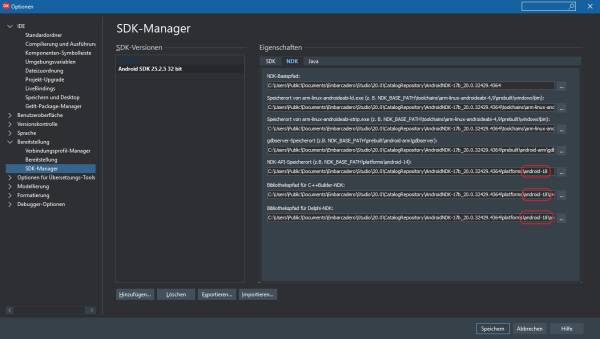 When installing Delphi 10.3 Rio, the default configuration is set to “android-14”.

If you did not change the api version, you will receive an error on compiling your code:

Your app should tell Android that it needs at least OpenGL ES 3.0. This can be done in “AndroidManifest.Template.xml”:

firststeps.txt · Last modified: 2020/05/24 16:47 by admin
Except where otherwise noted, content on this wiki is licensed under the following license: Public Domain